Renewable ammonia producer SynGest is now featured on the Fueling Growth website, which aims to show “How clean fuel companies are fueling economic growth in California and beyond.” Fueling Growth is a project of Environmental Entrepreneurs (E2).

SynGest uses a process to convert biomass to nitrogen fertilizer, and is “focused on replacing the fossil fuel energy used in agriculture with entirely sustainable and renewable alternatives.”

“We are right on the cusp of rolling out, on a large scale, billions and billions of gallons of truly low carbon renewable fuels. SynGest takes renewable biomass … and we convert that into nitrogen fertilizer products. We are just about to embark on building our first commercial scale plant, and that’ll be the first domino of what will be hundreds of these plants within the United States.”

Renewable ammonia production is of significant interest to the NH3 Fuel Association. Ammonia is carbon free and can be produced from nothing but air, water and renewable energy. However, today, most ammonia is produced using a carbon intensive process: traditional ammonia plants use the Haber-Bosch process with a fossil feedstock, and emit roughly 2 tons of CO2 for every ton of carbon free NH3 they produce. While there is a strong argument for using fossil ammonia as a fuel (CO2 emissions from natural gas would be concentrated at the top of the supply chain, where they can be captured economically, instead of being distributed to a million tailpipes), a low-carbon economy needs alternative production methods to break the link between ammonia and fossil fuels.

Working in similar fields to SynGest, two other renewable fertilizer companies have also made announcements in the last few weeks.

BioNitrogen Corp uses woody biomass to make urea fertilizer. They make ammonia using a biomass feedstock, and then combine it with CO2 (which can be captured from the ammonia process) to make the urea. They recently announced that they were developing five fertilizer plants, with $1.25 billion in tax-exempt bonds from Louisiana State. Their partners include ammonia technology licensors KBR and biomass gasification company PRM Energy. Together, the five Louisiana plants would produce 1,800 tons of urea per day.

BioNitrogen’s first plant, in Hardee County, Florida, is already in its pre-construction phase and is expected to produce 360 (short) tons of urea per day. Throughout 2013, the Hardee County site will be receiving biomass at a rate of 30,000 tons every two months. This woody biomass, which would otherwise have been burned or buried, is sourced from local phosphate mining land through an agreement with major phosphate and ammonia producer CF Industries.

Agrebon also uses biomass to produce ammonia, which it can then upgrade to urea and UAN (urea ammonium nitrate), but their approach is markedly different:

Agrebon‘s distributed modular plants use established scientific processes on a smaller scale to convert ethanol byproducts and other waste streams into valuable low-carbon nitrogen-based fertilizer. That fertilizer can then be used by farmers to grow corn, and it can also be used as a green, cost-effective input by ethanol plants.

Agrebon’s first plant, now in the financing stage, would be built on the site of Tharaldson Ethanol in North Dakota, one of the largest ethanol plants in the US (producing 153 million gallons per year). Because of the small scale and modular nature of Agrebon’s technology, the plant could go into production as early as six months after construction begins. It is expected to produce 25 tons of ammonia per day and 35 tons of urea per day. Notably, Agrebon expects the fertilizer “to be cost competitive, largely due to the local production model which eliminates shipping costs.” A full project outline is publically available online [pdf] as part of their grant application through the North Dakota Industrial Commission. 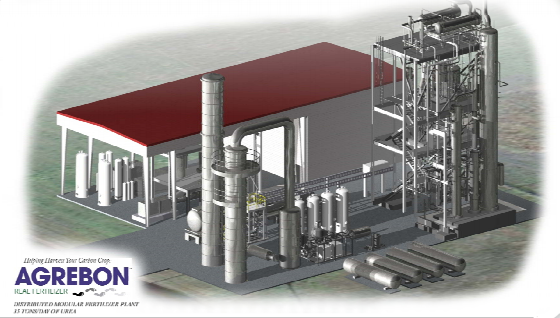